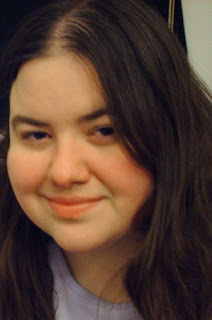 I'm a cat lover and have an adorable kitty named Cheshire (yes, after Alice In Wonderland). He may not grin, but he's just as mad. But that's ok, cause as the original Cheshire Cat quote goes, "We're all mad here."

Oh, yeah, I love Alice in Wonderland. And The Wizard of Oz. And most fairy tales.

I'm a child of the 80's, and enjoy just about everything from that time--even the crazy hair and clothing choices. The movies of that time were the best: The Princess Bride, Labyrinth, Monster Squad, Return To OZ, Poltergeist (and its sequels--yes, I admit it), The Terminator, and many many more. From other eras, I enjoy the Universal Monster movies of the 30's/40's, The Rocky Horror Picture Show, As Good As It Gets, The Wizard of Oz, Lord of the Rings, IT, and the list goes on. I also love Disney animated films, especially the classics. Though I found Tangled and Wall-E to be exceptional of recent years. Did I mention that I'm a huge movie buff?

I love to read, but I admit, I probably don't read as much as one might expect of a writer. My head's usually too busy buzzing with ideas for my own novels, but I do try to read everyday, even if it's just a few pages. I believe that is one of the best ways for writers to continually hone their craft and gain inspiration. Some of my favorite books include: The Princess Bride by William Goldman (changed the way I looked at books forever), The Wizard of Oz and Alice's Adventures In Wonderland (childhood favorites), IT by Stephen King (made me realize why he's considered the "king" of horror), and Scary Stories To Tell In The Dark by Alvin Schwartz (this trilogy introduced me to horror writing at a young age, and I haven't been the same since).

I mentioned I'm a gamer, and that I am. Big time. All time favorite game is Maniac Mansion on the NES. Yep, I kick it old school. Other games I enjoy are: Resident Evil (especially 1 and 4), Silent Hill (2 is epic), Zelda 2: The Adventures of Link (I admit, pretty much any time I hear music from the first two Zelda games, I get the urge to cry. Damn you, nostalgia!), The Sims (mostly 3 these days, but I've played since the first game and love the series), Left 4 Dead (so...many...zombies!), and Nancy Drew (There's been over 25 games in the PC series and I've played them all. Odd, since I've never read a single Nancy Drew book).

And finally, music (is anyone still reading this?). Favorite singers/bands include: Queen, Tom Petty & The Heartbreakers, Kate Bush, Bruce Springsteen, U2, Heart, The Killers, Coldplay, Adele, Charlotte Martin, The Misfits, and Inkubus Sukkubus. I also love just general music from the 50's/60's, as well as the 80's. There is so much good music out there it's hard to narrow it all down.

I love Halloween. If I could bottle the essence and feel of Halloween, I would take a swig everyday...

...that sounded better in my head.

I have eclectic tastes and a vivid imagination. I believe both make me the writer I am, and will hopefully stretch me to ideas, genres, and stories I've never thought to explore before.