I'm excited to announce the release of the first book in my Fear & Fairy Tales series entitled The Mad Alice. 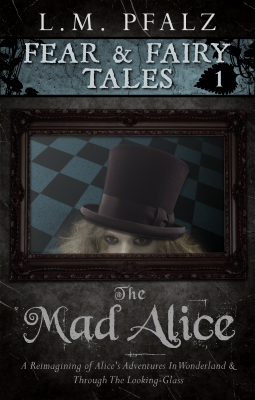 Description:
Nineteen-year-old Alice was living an ordinary life until she inherits her deceased father’s antique mirror. He left her an ominous note telling her to never uncover the mirror, but Alice’s curiosity gets the better of her. Soon, Alice finds herself in a familiar, yet no so familiar world of strange occurrences and dangerous characters. She questions her sanity at every turn, uncertain if her experiences are real or just a hallucination. Through her frightening adventures in the mysterious world, she begins to uncover dark secrets about herself—secrets that were best kept buried in her fragile, unhinged mind.

This novel is a dark reimagining of Lewis Carroll’s Alice’s Adventures in Wonderland and Through The Looking-Glass and What Alice Found There.

Fear & Fairy Tales is a series of dark and twisted reimaginings of fairy tales and other well-known children stories intended for an adult audience. This series is connected thematically only. Each novel stands alone, so the series may be read in any order.


Available at Amazon.com
Posted by LM Pfalz at 7:52 AM 0 comments

The Devil's Playground Is Available! (Book 3 of The Monster Entries Trilogy)

Description:
After giving birth to her first child, Zelda receives a visit from the devil. He demands her to give him her daughter, since she is the only one who can open Pandora’s box and unleash hell on Earth. Zelda will do anything to protect her child, even if it means going up against her most formidable foe yet—the devil himself. 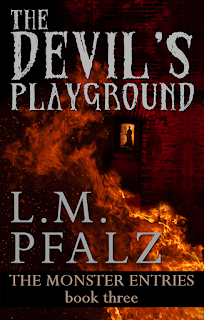